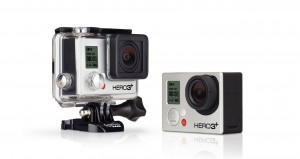 Exciting day here at the HobbyMounts HQ, with GoPro launching the all new Hero 3+ cameras.

Is the Hero3+ smaller than the Hero3?

Well, heres the thing, the camera body is actually the same size, it weighs a little less (around 2 grammes) BUT its the external waterproof housing where the magic happens! They’ve managed to get the casing 20% smaller than the original hero 3! The case is waterproof down to 40m, where as the old housing was 60m. Fear not, the new Hero 3+ fits in the old cases too! 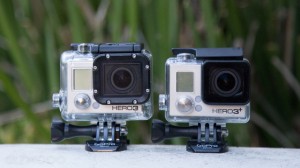 Has the battery been improved in the Hero3+?

“We did an independent test, running both cameras at 1080p/24fps. The original Hero 3 Black went one hour and 37 minutes of continuous shooting, and the Hero 3+ Black went two hours and nine, which is a very respectable 25-percent improvement over its predecessor.”

Has the WiFi been improved?

Oh yes! We’ve been treated to a nice new WiFi chip under the familiar looking hero3+ body, the chip is faster, which in real terms means that we should get less lag from the GoPro App and wifi remote. GoPro claim it’s 4x faster, meaning you can preview in the GoPro app in “almost” real time (1 sec delay over the previous 4 sec delay experienced on the hero 3)

What is this new “superview” I keep hearing about?

We all thought the wide angle was impressive on the hero3, well imagine “super wide angle” and this is what  GoPro call superview. If effectively allows you to capture more of yourself/surroundings. This is available in 720 and 1080 video.

For the super savvy out there, here is how they do it:

“When you’re shooting in 1080 or 720, the camera essentially crops the top and bottom of the image sensor, so it becomes 16:9. What SuperView does is that it shoots video in the 4:3 ratio, using the entire sensor, and then conforms it within the camera to be 16:9” 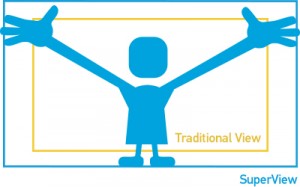 Are my old mounts still compatible?

GoPro havent changed anything here, so all your old mounts, and even your hero 3 housing will fit. They are however releasing a range of new and improved mounts (such as the suction cup and head strap mount) We will be reviewing these soon.

I keep hearing about a new low light mode, what is it?

“if you’re shooting 1080p at 60fps, and you’re not getting enough light on the sensor, it may automatically drop you down to 24fps (which is as low as it will go, mercifully).”

It can all be a bit daunting with new products, so we thought we’d list the differences and what it really means:

You can find more info here:

What will please a lot of people (especially mac users) is the exciting news you will soon be able to update your camera wirelessly, using your smartphone.

GoPro have also announced the Hero 3+ silver edition, we will be reviewing that soon too.

2 thoughts on “The GoPro Hero 3+ Black Edition What does it all mean?”